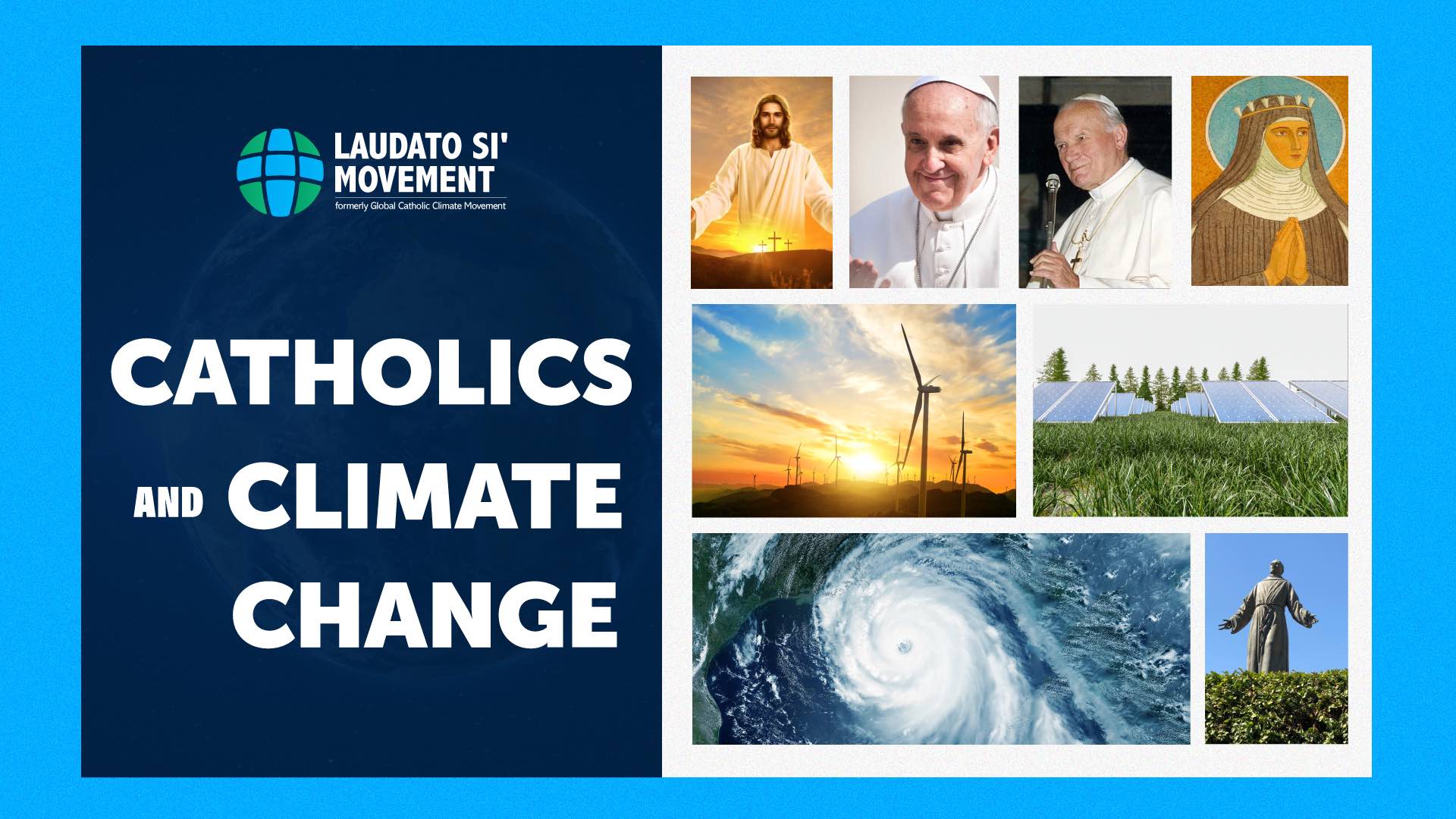 Pope Francis, the Catholic Church, and Catholics take action against climate change every day. Pope Francis especially has led the way during his papacy.

In 2015, he wrote the encyclical letter Laudato Si’, which helped the world’s 1.2 billion Catholics better understand that “everything is connected” and put millenia of Catholic teaching in the context of today’s ecological crisis.

Well before Pope Francis and Laudato Si’, however, Catholics were praying for and taking action against the climate crisis and encouraging others to join them as they worked to care for God’s creation.

Catholics have long cared about climate change because the problem touches on many issues that are at the core of what it means to be Catholic and to live out our faith as Catholics.

What is climate change?

The present climate crisis is being reflected in the dramatic rise in global temperature due, in large part, to the emission of greenhouse gases (GHGs) that we have been producing since the Industrial Revolution.

A 2013 report by the Intergovernmental Panel on Climate Change (IPCC) stated that “increased fossil fuel use and emissions, particularly of fossil carbon dioxide, have caused the last few decades to be the warmest on the Earth’s surface successively than any previous decade since 1850.”

Such warming has devastating effects on many levels, including food production, extreme weather events and water shortages, and rising sea levels.

Scientists say a warmer planet will likely produce stronger and more devastating natural catastrophes of the kind we are already seeing today: historic floods, stronger hurricanes, longer droughts, more dangerous wildfires, all of which cause death and displacement and overwhelmingly affect the most vulnerable.

Throughout Laudato Si’, Pope Francis points out that climate change is a moral issue in which all Catholics and the Catholic Church are called to act.

“In fact, the deterioration of the environment and of society affects the most vulnerable people on the planet: ‘Both everyday experience and scientific research show that the gravest effects of all attacks on the environment are suffered by the poorest'” (LS 48).

These effects will be exacerbated – with a greater impact on developing countries – if we do not take measures to prevent the temperature from rising by more than 1.5 degrees Celsius.

Why are Catholics and the Catholic Church concerned about climate change?

The Scriptures in Matthew 7:12 share the law par excellence of charity: “Therefore, whatever you would have men do to you, do also to them.”

God’s question to Cain is also imperative for our times: “Where is your brother?” (Gen. 4:9).

The Catholic Church worries about climate change because its effects have repercussions on all living beings, most seriously on the most vulnerable.

The call is to act and enter into the communion of the Spirit for the well-being of our brothers and sisters in every corner of God’s creation. It is also necessary to contribute our part in the preservation of our common home.

Although, as human beings, we are made in the image and likeness of God, this does not make us superior to the rest of creation. Rather, this makes us responsible for it, since we are endowed with the intelligence to guide all things for good and thereby give glory to God.

The vision of nature as an object of profit is erratic in that it prevents us from feeling part of it, thus, we have allowed ourselves to cross its limits in the name of progress or particular interests. This has created all kinds of imbalances with the consequences that we’re seeing all over society and throughout the world.

As Catholics, we are called by faith to care for creation, for it is a reflection of God’s greatness and power, a power that is ceaselessly renewed.

“In the Bible, the God who liberates and saves is the same God who created the universe, and these two divine ways of acting are intimately and inseparably connected” (LS 73).

From the beginning there was a salvific plan for humanity. In the same way, through the Scriptures, we see that God has taken it upon himself to make known to us the immense dignity that each of His creatures has.

“Can you not buy five sparrows for two pennies? And yet not one is forgotten in God’s sight” (Lk 12:6).

“Look at the birds in the sky. They do not sow or reap or gather into barns; yet your heavenly Father feeds them” (Mt 6:26).

What is the role of the Catholic Church in all this and with climate change?

The Church has been a fundamental part in the development of thinking for humanity. In it we repeatedly find reflections that evoke love and compassion for our common home.

St. Bonaventure (1217-1274): “The whole of creation can be considered as a most beautiful song that proclaims the beauty of the Creator, within which each creature intones a different part of it with a diaphanous and energetic voice.”

Perhaps the greatest example of contemplation we have in St. Francis of Assisi, who chose a lifestyle in poverty and simplicity and, through his choice, melted into the splendor of nature, which he beautifully reflects in the Canticle of the Creatures, “Praise be to you my Lord in all your creatures, especially in the Lord brother sun, through whom you give us the day and enlighten us.”

For this reason, he is the patron saint of ecology beloved by many Christian denominations.

Pope Francis praises St. Francis’ prophetic example in his encyclical Laudato Si’: “He shows us just how inseparable the bond is between concern for nature, justice for the poor, commitment to society, and interior peace” (LS 10).

In the search for this fundamental coherence, several of the messages that Popes have left us in their speeches and documents invite us as Catholics to a paradigm shift and to be truly concerned about the climate crisis and God’s creation.

St. John Paul II from the World Day of Peace in 1990: “Christians, in particular, realize that their responsibility within creation and their duty towards nature and the Creator are an essential part of their faith.”

It is therefore a good thing for humanity and for the world that we believers better recognize the ecological commitments that flow from our convictions.

Benedict XVI, in his encyclical letter Caritas in Veritae, tells us: “Human freedom can make its intelligent contribution to positive evolution, but it can also add new evils, new causes of suffering, and real setbacks. For this reason, the Church’s action not only seeks to recall the duty to care for nature, but at the same time ‘must above all protect mankind from self-destruction.’”

Also, in his inaugural homily, Benedict XVI made clear how important care for creation and ecological conversion must be for all Catholics.

“The external deserts of the world are growing, because the internal deserts have become so vast. Therefore, the treasures of the Earth no longer serve to build God’s garden for all to live in, but have been made to serve the powers of exploitation and destruction.”

Pope Francis has given voice to the Holy Spirit through the encyclical Laudato Si’ – Praise be to you – to safeguard the life and dignity of all creatures in an environment dominated by individualism, short-sighted thinking, and spiritual drought.

Through this accessible, approachable, and practical document, the Pope poses a series of questions and enlightens us based on Scripture, the documents of the Catholic Church, and his ecumenical experiences.

The leader of the Catholic Church is committed to addressing climate change and the deep roots of the evils that afflict us as humanity, especially the most vulnerable.

That is why he is especially interested in seeing the whole world mobilize to stop climate change.

First, Pope Francis calls us all to ecological conversion, a process of recognizing our contribution to the social and ecological crisis and acting in ways that heal and renew our common home.

Read more: What is an ecological conversion?

The Pope invites all Christians to realize the importance of caring for God’s creation for our faith. “Living our vocation to be protectors of God’s handiwork is essential to a life of virtue; it is not an optional or a secondary aspect of our Christian experience” (LS 217).

What can I do?

All this is an invitation, not only to reflect, but also to take action for God’s creation, the most vulnerable, and for future generations.

Always seeking to care for the planet, the Laudato Si’ Movement, guided by the Holy Spirit, supports the various initiatives that emerge from the local level and promotes many others from the global level.

An ecological conversion is possible if we live the faith in Christ the Savior, who dies and rises for our sins, and makes us become those new men and women who see reality in a broader way, as heirs of a beautiful unrepeatable work, which we cannot afford to give up.

Ana Carolina Gutiérrez Zapata is a Spiritual Consultant for the Laudato Si’ Movement. She has spent 11 years as part of the Integral System of New Evangelization in Colombia. She has been linked to various social and educational organizations as a professional in communications and corporate relations. She currently lives in Italy.

[…] Why Catholics care about climate change […]