Bringing the heat to COP26: An ambitious Treaty wants us to treat Fossil Fuels like Nuclear Weapons 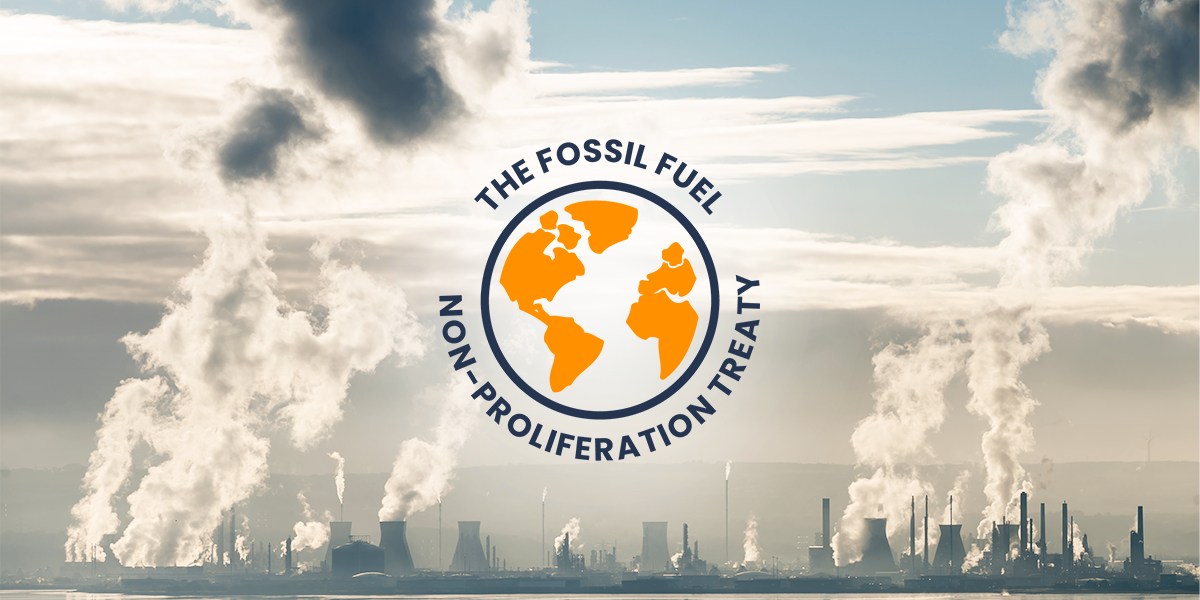 A new thought is taking shape; the equating of the exploration of oil and gas and the expansion of fossil fuel projects to investing in weapons of mass destruction– our own destruction. While this may seem a stretch to some, statistics and reports say otherwise; In 1988 at the Toronto Conference on the Changing Atmosphere, “climatic upheaval was termed as “second only to nuclear war”, a sentiment echoed from the CIA to MI5 and the United Nations. Climate action failure topped weapons of mass destruction and became the greatest risk facing the world, in terms of both impact and likelihood, according to the 2020 WEF Global Risk Report.

The root cause of the climate emergency indeed is fossil fuels.  Coal, oil and gas are responsible for almost 80% of all carbon dioxide emissions since the industrial revolution. ‘In addition to being the leading source of emissions, fossil fuel systems have left billions of people without sufficient energy to lead lives of dignity due to the high cost of electricity and fuel and prioritisation of profit over delivery of service’.  In spite of this, ‘Governments are planning to produce about 50% more fossil fuels by 2030 than would be consistent with a 2°C pathway and 120% more than would be consistent with a 1.5°C pathway’  according to the UN Production Gap Report 2019. In addition, the Paris  Agreement, vital as it is, does not mention fossil fuels as the main contributors to climate change. Not once.

“We already have more than enough fossil fuel in production to make the renewable transition, making expansion plans redundant and a hindrance to progress”.
Tzeporah Berman, Chair of the Fossil Fuel Non-Proliferation Treaty Initiative and International Program Director at Stand.earth

The Fossil Fuel Non-Proliferation Treaty was first publicly launched in September 2020 and the Laudato Si’ Movement is a partner of this global robust initiative that has been endorsed by 18 Cities & Sub-National Governments, such as Vancouver, Barcelona, Los Angeles, Toronto and Sydney, 132,737 Individuals, 1,000+ Organisations.

This gap between the diagnosis of the crisis and the actions being taken in response to it is why the Fossil Fuel Non-Proliferation Treaty (FFNPT) Initiative seeks to “phase out coal, oil and gas faster, more fairly and forever” to avoid locking the world into catastrophic and irreversible climate disruption.

The Treaty Initiative proposes a managed decline of fossil fuel production in three stages a; End new expansion of oil, gas and coal production; Phase out existing production of oil, gas and coal in a manner that is fair and equitable, and Invest in a transformational plan to ensure 100% access to renewable energy globally, supporting dependent economies to diversify away from fossil fuels.

At the moment all eyes are set on COP26 and its outcomes. Many agree that bold and immediate action is required to address the climate emergency.  While this dialogue has centered mostly around cutting emissions, many say this is not enough and a slow transition might actually do more damage than a drastic and immediate end to exploration and expansion of unnecessary and unburnable fossil fuels.

During COP26 the youth representing 150 other youth leaders from around the world called on governments to disarm the world of coal, oil and gas with a Fossil Fuel Non-Proliferation Treaty. Their open letter decries fossil fuels as their “generation’s weapons of mass destruction,” demanding that governments step up and phase out the primary cause of the climate crisis – fossil fuels. Earlier this year the same call to act fast and just to end fossil fuel expansion was made by 101 Nobel Laureates, including the Dalai Lama and by 2,185 scientists from all over the world. Before COP26 150 legislators from 30 countries called for a fossil fuel free future.

In October faith leaders made the moral case for a global just transition away from coal, oil and gas and you can endorse this letter and the Treaty now by signing on behalf of your institution. The letter states that too many coal mines and oil and gas wells are already under production, setting the world on course to fail to meet the Paris Agreement’s goal of 1.5°C. To avoid the worst impacts of the climate crisis, we must hold ourselves, our neighbors, and our governments accountable and collectively act. For too long, government action has been painstakingly slow and catered too much to the reckless and deceptive fossil fuel corporations, preventing meaningful and timely climate legislation. There is a glaring disconnect between countries’ approvals for continued fossil fuel expansion and their rhetoric proclaiming long-term ‘net zero’ targets, a dangerous veil to evade responsibility, delay action, and rely on unproven technologies. The faith leaders hail from many faiths and beliefs, but together we can remedy the decades of negligence to safeguard our coexistence with this earth. Just as our beliefs are entrenched in religious and spiritual teachings, our response to the climate crisis must be deeply rooted in science and equity to heal the planet and people alike.

We have a narrow window of opportunity to act which is why we are joining the growing chorus of Indigenous Peoples, civil society leaders, youth, cities, lawmakers, academics, and scientists calling for a global treaty to phase out fossil fuels and support a just transition powered by clean energy and a sustainable future for all.

In a session at the COP26 Coalition’s People Summit, FFNPT partners introduced theTreaty to the public as a complementary mechanism to the Paris Agreement that will drive a global and equitable transition away from coal, oil, and gas production.  Panelists included Caroline Lucas, Mark Campanale (founder and Executive Chair of the Carbon Tracker Initiative), Nikki Reisch (Center for International Environmental Law), Harjeet Singh (Climate Action Network-International) and Farzana Farouk Jhumu (Fridays For Future Bangladesh).

With climate inaction being termed by the 2021 WEF Global Risks Report as “an existential threat to humanity”, it goes without saying that this level of threat requires global cooperation at a scale similar to that of previous global crises, be it nuclear weapon proliferation, ozone depletion or the global pandemic.  The required unprecedented international cooperation faces the challenge of disparity between developed and developing nations. As the IEA Report pointed out,  there is a strong and worrying divergence between the capping emissions and seeking to move away from fossil fuels in advanced economies on one hand and the emerging market in developing economies on the other.

“Like a gardener, we don’t just need to water the flowers of renewable energy, we actively need to pull out the fossil fuel weeds as well. That is why we need a Fossil Fuel Non-Proliferation Treaty.” – Mohamed Adow, Power Shift Africa

An effectively managed phasing out of fossil fuel production means that climate goals are more likely to be met. Not only that,  but workers and vulnerable communities around the world who are dependent on production for their livelihoods risk will be cushioned against the sudden loss of income and livelihoods when these projects become stranded and unviable due to falling demand.

Carbon Tracker and Global Energy Monitor during COP26 on November 11 press conference made public a prototype of the first ever Global Registry of Fossil Fuels to foster transparency on fossil fuel production and make governments more accountable. It will enable policymakers and experts around the world to assess whether countries are on track to meet their climate commitments and provide data and analytics tools for identifying a means of winding down fossil fuel production.

“The Global Registry of Fossil Fuels will drive greater transparency about governments’ and companies’ plans for oil, gas and coal in the future, and – crucially – help to make governments more accountable for their plans, thus enabling all users of the Registry to link fossil fuel production with national climate policies. We see one of the key user groups for the Registry being the finance sector: it will enable investors much more effectively to assess stranded asset risk.”

All this will usher in what the FFNPT beautifully captures in its vision as a “a world where vulnerable communities are offered an alternative pathway for their development and prosperity that doesn’t rely on fossil fuel production, where poorer countries are supported by wealthier countries to transition away from fossil fuels, and where the global energy system shifts rapidly, and equitably, towards a zero carbon economy that provides better economic and health outcomes for all.”

For more detailed information about the FFNPT, see this remarkable in-depth presentation.

Environmental lawyer for over twenty years, Svitlana holds a PhD in Environmental, Natural Resources, Land and Agrarian Law and a doctorate on Climate Change Law, Climate Governance and Climate Policy. She collaborated with many international institutions, including IUCNAEL, USAID and CAN EECCA. After years of lecturing at the University, international expertise in environmental, energy and climate law and public advocacy on the environmental rights of local communities, including grassroot campaigning against the fossil fuels, Svitlana is a climate activist, green strategist and a campaign manager, passionate about climate justice, ending fossil fuels, green finance and green inclusive economy. Most recently led, designed and managed successful regional and national Climate, Fossil Free, 100% RE till 2050, Just/Green Recovery and Green Deal campaigns in Eastern Europe, Caucasus and Central Asia for 350.org. Lives in Ivano-Frankivsk, Ukraine with her husband and two kids.