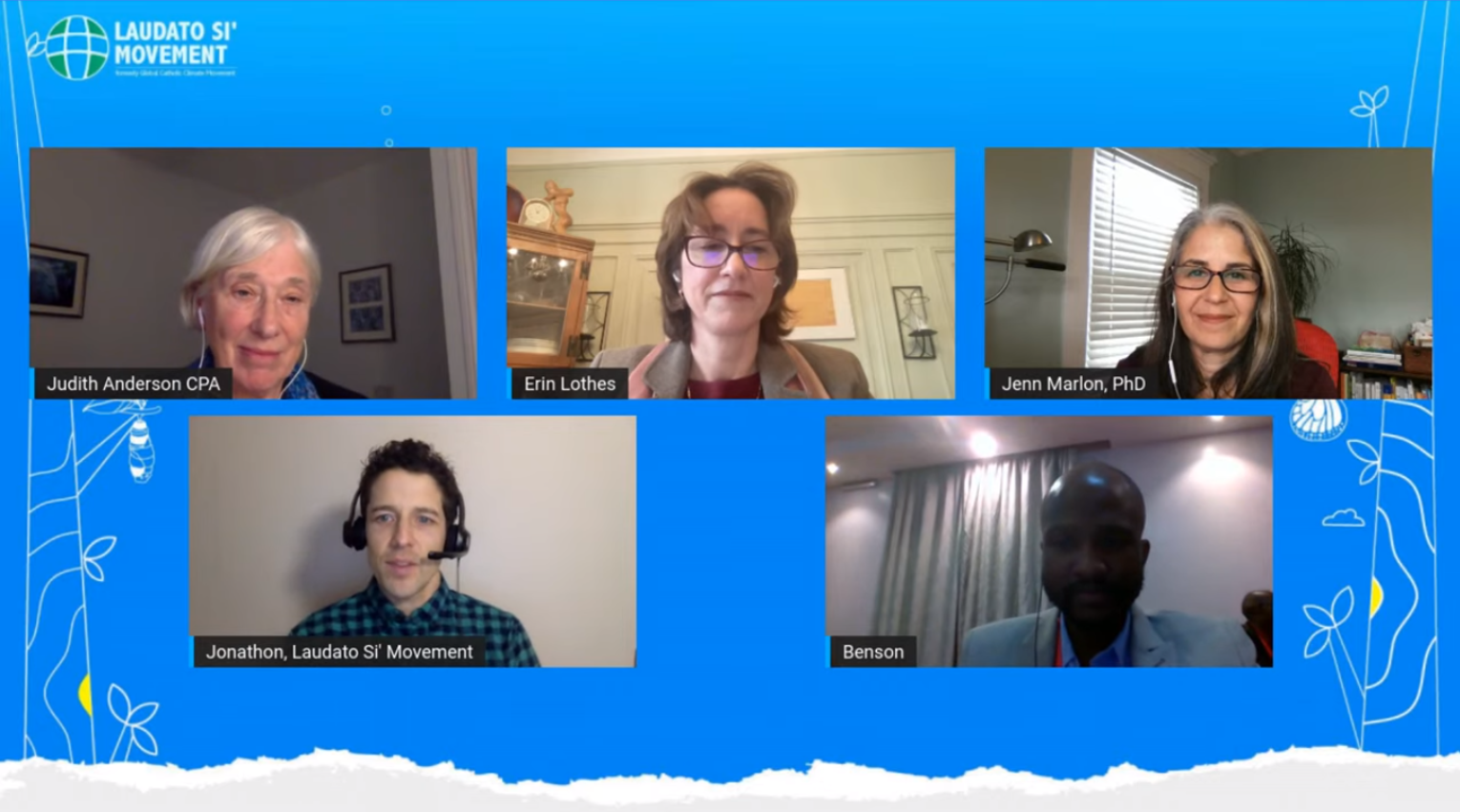 Inspired by Pope Francis’ November intention of the Pope’s Global Prayer Network for “people suffering from depression or extreme exhaustion,” the Laudato Si’ Dialogue on “How to Turn Climate Anxiety into Climate Action?” sowed hope.

Experts in mental health and climate crisis participated and shared their knowledge, explaining the seriousness of climate anxiety around the world but also providing reasons for hope amidst the climate emergency and ecological crisis.

Did you miss this event? Watch it here

Jennifer R. Marlon, Ph.D., research scientist and professor at the Yale School of the Environment and the Yale Climate Change Communication Program, explained how different groups of people are coming together to face the climate crisis.

Benson Makusha, International Catholic Student Youth International, gave testimony on how young people in Africa are suffering, and 60 percent of the continent’s inhabitants are affected by the climate crisis on a daily basis.

Finally, Erin Lothes, Associate Professor of Theology at St. Elizabeth University (New Jersey, USA) and Program Manager of the Laudato Si’ Animators Program of the Laudato Si’ Movement, emphasized the spiritual side, which is fundamental for all to be able to move forward and take action.

Main reflections of the speakers

She began by commenting on the reasons why young people attend a climate march. There are three groups: those who don’t have much hope until they arrive and are motivated by meeting others in the same situation; those who have hope, but have an obligation to act anyway: and those who have hope and see the importance of protesting.

Marlon explained how different groups of people fit together in the face of the climate crisis, according to a survey conducted in the United States in December 2020: 26 percent are alarmed; 29 percent are concerned; while, on the other side, 12 percent are doubtful, and only 8 percent remain dismissive of the problem.

“More than half of young people believe they will not have access to the same possibilities their parents had; they think the things that are most valuable to them will be destroyed. And they believe that humanity is at risk.”

In addition, “67 percent of young people feel sad or afraid; 62 percent anxious, and others angry or powerless.”

She added that “eight out of ten young people think that people who have power have failed; while 39 percent of young people are hesitant to have children for these reasons… Children are suffering a moral wound because of government inaction.”

“Nearly 18 million people have had to leave their place of origin because of lack of food. They are climate migrants.”

“Sixty percent of people in Africa are suffering the consequences of climate change.”

“As young people and students, what is our future, what actions should we take?”

“We must talk to young people, show them love and concern, and tell them that what they are feeling is real and normal.”

“A faith-based response for those involved in the climate crisis would be two words: solidarity and spirituality.”

“Talking about solidarity has always been a way of putting love into action, putting values into life and feeling that we are moving together in creating the kind of world we want.”

Lothes spoke of three gaps: the knowledge gap, of those who are not informed enough, or don’t want to be; the worry gap, when people think they have more time or there are more urgent things; and the action gap, when people are aware of the problem but don’t know what to do.

“People’s suffering is not trivial. We have to acknowledge in a sincere way the question of why God is letting this happen? It is a theological question and we must seek the answer in our Christian faith, with hope and faith in who God is.”