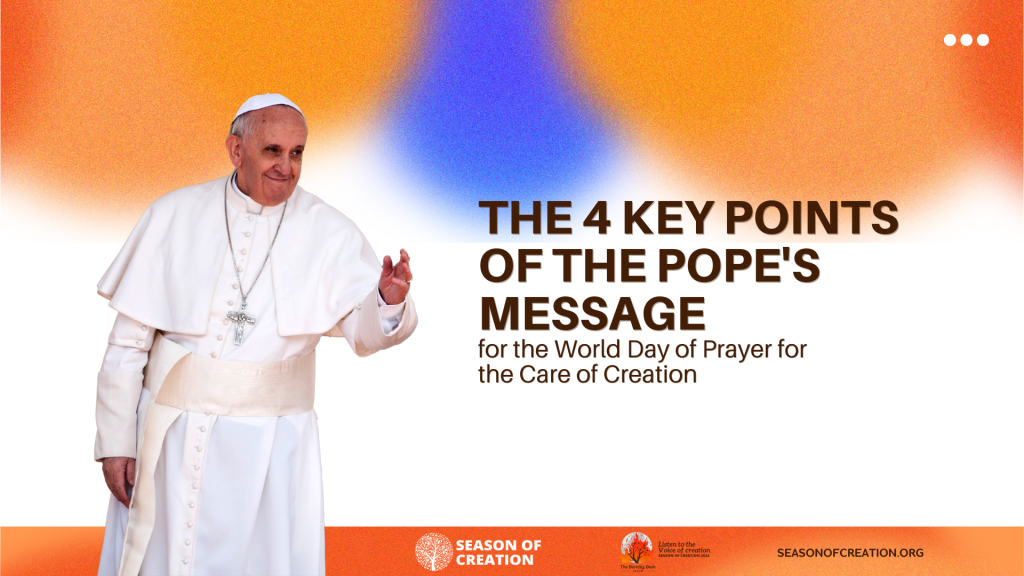 For the first time, Pope Francis has published in advance his message for the World Day of Prayer for the Care of Creation, which is celebrated every September 1. It marks the beginning of the Season of Creation, an ecumenical period that unites Christians to pray and take action for our common home.

What does the message say? We summarize it in four key points:

The Pope defines the Season of Creation as “an opportunity to cultivate our ‘ecological conversion’”, recalling this concept encouraged by St. John Paul II as a response to the ‘ecological catastrophe’ announced by St. Paul VI as early as 1970.

In this way, he invites all Christians during this time to “pray once more in the great cathedral of creation, and revel in the “grandiose cosmic choir” made up of countless creatures, all singing the praises of God”.

People of faith, says the Pope, feel “even more responsible for acting each day in accordance with the summons to conversion.  Nor is that summons simply individual: “the ecological conversion needed to bring about lasting change is also a community conversion”.

Listening to creation, Francis mentions that there is a “kind of dissonance”: “On the one hand, we can hear a sweet song in praise of our beloved Creator; on the other, an anguished plea, lamenting our mistreatment of this our common home”.

In this regard, the Executive Director of Laudato Si’ Movement, Tomás Insua, mentioned: “The sweet song of creation is mixed with its bitter cry, as evidenced by the intense heat wave that is experienced in much of the northern hemisphere and that has already killed, only in Spain and Portugal, more than 1000 people or has left 5 million people without water in Monterrey, Mexico”.

Francis encourages people to stop consumerism, change lifestyles and harmful systems. All scientific reports prove it and the Pope reaffirms it: “We are reaching ‘a breaking point’” and we must act now. “The crisis is no longer a hypothesis of a distant future but a tangible reality that is costing human lives,” added Tomás.

Ahead COP 27 on climate (Egypt, November 2022) and COP 15 on biodiversity (Canada, December 2022) Francis recalls in his message the importance of “promoting the effective implementation of the Paris Agreement”, as recently ratified by the Holy See.

“Each passing moment is an opportunity for everyone, especially world leaders, to reverse the biodiversity and climate crises. Let COP 27 bring forth ambitious commitments to prevent carbon emissions from fossil fuels and support for clean energy transition as well as efficient relief for our brothers and sisters already within the climate crisis. Let COP 15 bring forth a firm commitment to end any more biodiversity collapse”, said Lindlyn Moma, Advocacy Director of the Laudato Si’ Movement.

And to the community of Catholics, the Pope calls them to prayer: “In this Season of Creation, let us pray that COP27 and COP15 may unite the human family to decisively address the double crisis of climate and biodiversity reduction”.

Francis also uses his message to call on nations to halt the further collapse of the “web of life” – biodiversity – pointing to four principles:

Life is GOOD. I had a brain haemorrhage, (1974-75, as unconscious). I was an honours student, but all of that was cancelled in the operations that were done to me. BUT, IT WAS ON A GR.13 RETREAT. I have worked for the Ministry of Labour for 29 1/3 years time. I worked part-time, 10:30-5:00, and I met SENATOR TONY DEAN on the job! We went out for 45-50 meals and it was with him that I went to the SENATE to receive an award from Senator Dean.
I do love Senator Tony Dean, and all of you. who will read this message!

Thanks dear Guadalupe Garcia for the abridged version. I am grateful. Time is a big factor in today’s world. God bless you.

Well written, but are we listening?

It is difficult for many Christians to heed this message when the Church was anti-science for most of its history. The breaking point is imminent. Unfortunately people will not change their lifestyles until it is passed.