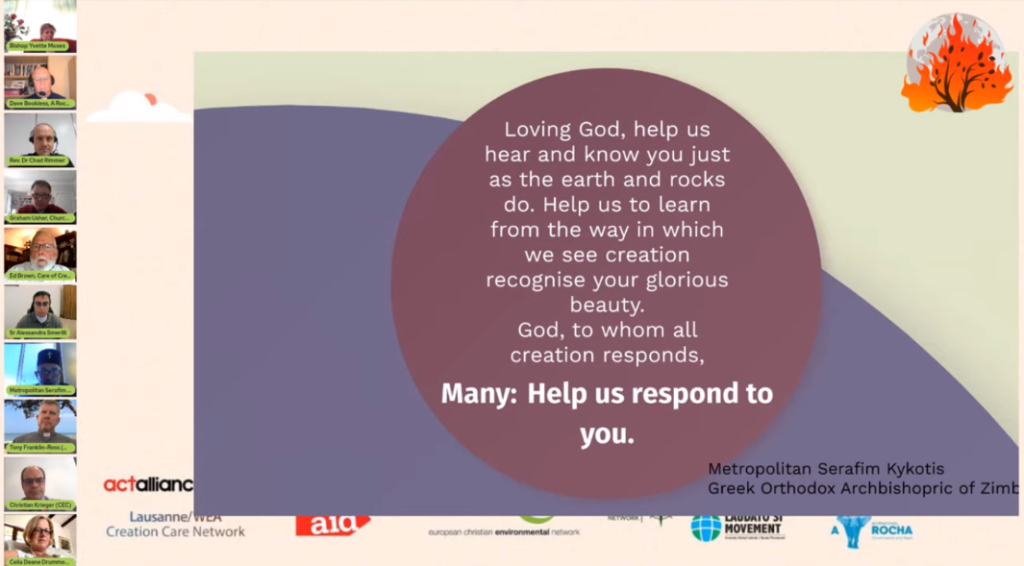 With the celebration of the World Day of Prayer for the Care of Creation, this Thursday, September 1st, the Season of Creation 2022 began. Religious leaders from different Christian denominations around the world came together to participate in a prayer meeting to reflect on this year’s theme, “Listen to the voice of creation”.

The first stage of the meeting was led by a series of prayers: the first by Celia Deanne-Drummond giving thanks to God for all creatures; then Psalm 19, read by Rev. Chad Rimmer; also Rev. Anne Burghardt led a profession of faith; and concluded with a prayer of thanksgiving to the Earth by Metropolitan Serafim Kykotis.

The World Council of Churches was present with a call to ecological conversion for churches and communities in this Season of Creation, by Louk Andrianos.

PRAY: Watch the full meeting and pray at this #SoC kick-off.

Later, three leaders presented a short reflection on the theme “Listen to the voice of creation”. First, His Eminence, Metropolitan Job of Pisidia, encouraged us to take care of the environment for future generations and invited us to listen to the moans of humpback whales.

Afterwards, Sister Alessandra Smerilli, Secretary of the Dicastery for the Promotion of Integral Human Development, spoke about synodality, affirming that it is not limited to human beings, but that species must also be integrated, because they possess the same dignity. He invited us to put aside “our comfortable ways of living” and ended by inviting us to listen to the Spix’s Macaw, an extinct species.

Dr. Dave Bookless, Director of Theology, representing A Rocha International, referred to the importance of educating children in listening to the voice of creation.

CELEBRATE: Organize an event with your community. Register here

Afterwards, Rev. Chad Rimmer invited the audience to listen to the song of an old tree, composed by Jason Singh, who was able to record the electrical impulses of the tree, connected to a device that translated these impulses into musical notes.

At the end of the meeting, the participants held a communal intercessory prayer, praising God and asking for His protection.

Rev. Chad Rimmer participated as moderator, as well as Suzana Moreira of the Laudato Si’ Movement.

At the end of his catechesis on Wednesday, August 31, Pope Francis invited the Catholic community to participate in the Season of Creation 2022:

The Pontiff wished that this season “may encourage everyone to make a concrete commitment to take care of our common home, in the face of our consumerist habits. Sister Earth groans and implores us to stop our abuses and its destruction”.

He also recalled praying for the upcoming United Nations Summits, COP27 and COP15, so that “they can unite the human family, and decisively face the double crisis of climate and biodiversity reduction”.