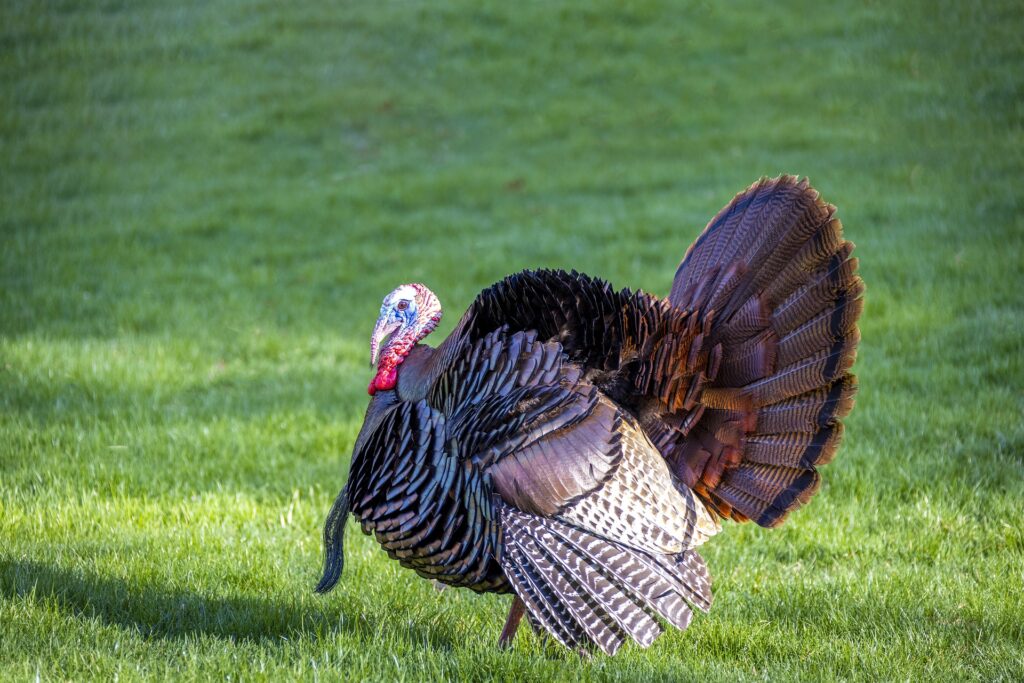 “We read in the Gospel that Jesus says of the birds of the air that ‘not one of them is forgotten before God’. How then can we possibly mistreat them or cause them harm?” (LS 221)

The reality of turkey farming is that thousands of birds are tightly packed into industrial-sized sheds, with no ability to express natural behaviour. Automatic mechanisms control their feed, heating and light.

They will all be either chronically disabled, damaged, diseased and/or in chronic pain due to selective breeding for unnatural weight gain and due to the rearing conditions. Too fat to fly, too disabled to even walk without difficulty.

Driven somewhat mad by this imprisonment, they can start attacking each other.

Farmers ‘manipulate’ male birds for semen, then ‘manipulate’ females to impregnate them with the semen. The entire experience is invasive and terrifying for the birds.

Chicks are hatched in incubators. They search for their mothers but never find them. They have no parental guidance to find food and may starve.

Injured, sick, and too small baby turkey may be ground up alive.

Bits are cut off them for various reasons, from the beak, snood, wings and toes with no pain relief, leaving them in agony after the traumatic experience of the mutilation.

During heatwaves they will bake in their sheds. Many die this way.

At slaughter time, several at one time are grabbed by the legs and thrown into crates on lorries. The journey to the slaughterhouse is so bad that some don’t survive.

At the slaughterhouse they are hung upside down by their feet on a moving belt. They pass through an electric current which is meant to stun, but may only cause an electric shock. Then they pass a slashing knife which could miss their throats and catch their faces, and they could go into the boiling water having been electrically shocked, knifed and still conscious.

Turkeys are fed with soy from South America, which is linked to deforestation, pollution, land destruction, loss of biodiversity and climate change.

Land, water and food is wasted at an astronomical rate to grow animals. Even though 700 – 800 million people are hungry or starving, yet 70 – 80% of the world’s soy crop is fed to turkeys and other farm animals, instead of to humans. Feeding the soy to animals first instead of directly to humans results in the loss of about 90% of the calories and proteins that the feed contains, giving back only about 10%.

Turkey farms encourage the spread of infections and are a reservoir of diseases, some of which are dangerous for humans like salmonella enteritidis and bird flu. Bird flu can be deadly for humans.

Our next pandemic could come from a turkey farm.

New outbreaks of bird flu in poultry farms and captive birds as well as in wild bird populations are constantly being reported, with over 200 cases confirmed across the country in the last 12 months. (Defra press release 28-10-22)

All domestic infected birds are culled to prevent further infection.

Antibiotics are routinely used to combat diseases and infections that thrive in the filthy and unhygienic conditions of factory farms. This has contributed to the creation of antibiotic-resistant bacteria – superbugs. So now we have the increased and growing risk of humans contracting life-threatening diseases for which antibiotics are no longer effective.

Respecting animals, respecting the planet and respecting other humans are all intimately interlinked. If we abuse one, we harm all three.

Giving up turkey doesn’t have to be a sacrifice; there are delicious vegan options available. Check out here and here.