Faith for a just energy transition: What was said at this international interfaith symposium? 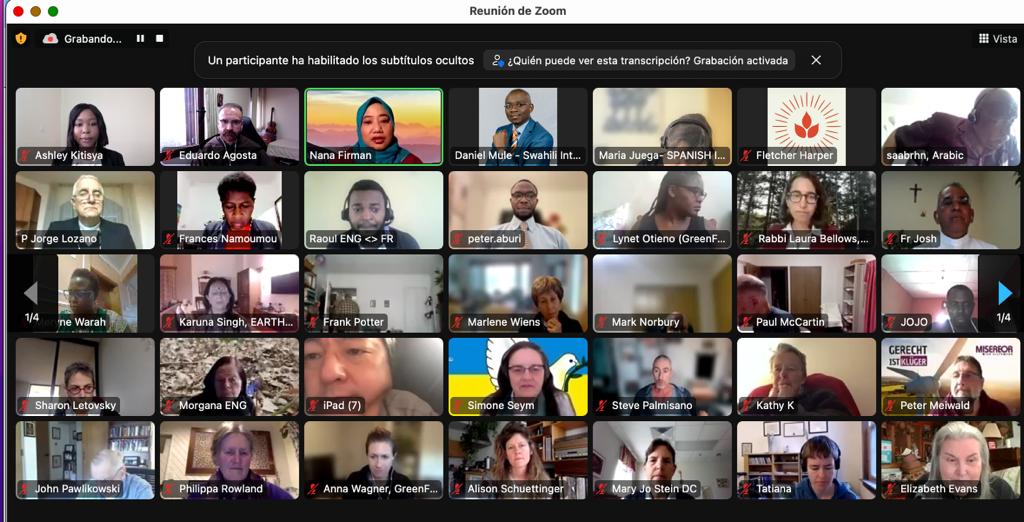 On September 28 the virtual event Faith for a Just Energy Transition took place, organized within the Season of Creation 2022 by Green Faith in collaboration with Laudato Si’ Movement and the Catholic University of East Africa and the Muslim Supreme Council of Kenya.

In his opening remarks Rev Dr. Peter Mbaro, Director of the university’s Center for Social Justice and Ethics, said, “The Catholic University of East Africa is committed to researching, teaching and learning about these issues. Africa must engage against climate change. This continent is blessed with a lot of sunlight that should be used for energy instead of fossil fuels that are causing so much suffering. The Fossil Fuel Non-Proliferation Treaty is essential for peace.”

Jorge Lozano, Secretary General of the Council of Catholic Bishops of Latin America and the Caribbean (CELAM), opened with his message: “Our faith in creation tells us that God has given us humans intelligence, love and creativity in the image and likeness of the Creator…. It is imperative that we hear the cry of the poor and the cry of the Earth (LaudatoSi‘ #49). Time is pressing…All governments must work together to achieve this Fossil Fuel Non-Proliferation Treaty and support Just Transitions to Clean Energy and Sustainability for all peoples…Several Catholic institutions have already divested.” (read full message here).

This interfaith gathering highlighted the protection of God’s Creation as a fundamental principle in all faiths, as mentioned by Sheikh Abuhamza, Muslim: “Allah reminds us of our responsibilities to all other creatures on Earth as guardians.” As Peter Aburi, representative of the international Bahai community, said: “We are dealing with something sacred. The Earth is God’s creation. It is God’s work. We must act with reverence. It is entrusted in our care.”

The goal of the Fossil Fuel Treaty is to call for an immediate end to new fossil fuel projects but through a just phase-out of fossil fuels and a just transition for workers and communities, including universal access to clean energy so that it is not a luxury, but a right.

Father John throm Kureethadam, Coordinator of the Sector of Ecology and Creation at the Vatican Dicastery for Promoting Integral Human Development, said: “As it stands now, we will reach a temperature increase of 2.8° Celsius, when in the last millennium the temperature variation has been only 1° Celsius. This is a schizophrenic situation. Coral reefs are dying. Droughts are increasing. Our house is collapsing.”

Given the need to support a fossil fuel treaty, two activists spoke of situations in Uganda and Fiji, where fossil fuel projects are underway.

An East African crude oil pipeline threatens to displace thousands of families and farmers from their land and homes, as well as damage water resources and wetlands in Uganda and Tanzania, including the Lake Victoria basin – on which more than 40 million people depend for drinking water and food production.

EACOP will also increase the severity of the global climate emergency by transporting oil that will generate more than 34 million tons of carbon emissions per year. The pipeline would open critical ecosystems in the landlocked regions of Central and East Africa to commercial oil exploitation.

“Recently, the European Union asked its member states to not support, either diplomatically or financially (by divesting), the pipeline and we hope that eventually, this disastrous project will be stopped.” said Ashley Kitisya of Laudato Si’ Movement Africa.

The event ended with two calls to action:

Want to watch the event? Do it here by activating the automatic subtitles in your language.