The “Italian Catholic Divestment Campaign from Fossil Fuels for an Economy of Peace” launched with an appeal to divest for Christmas. 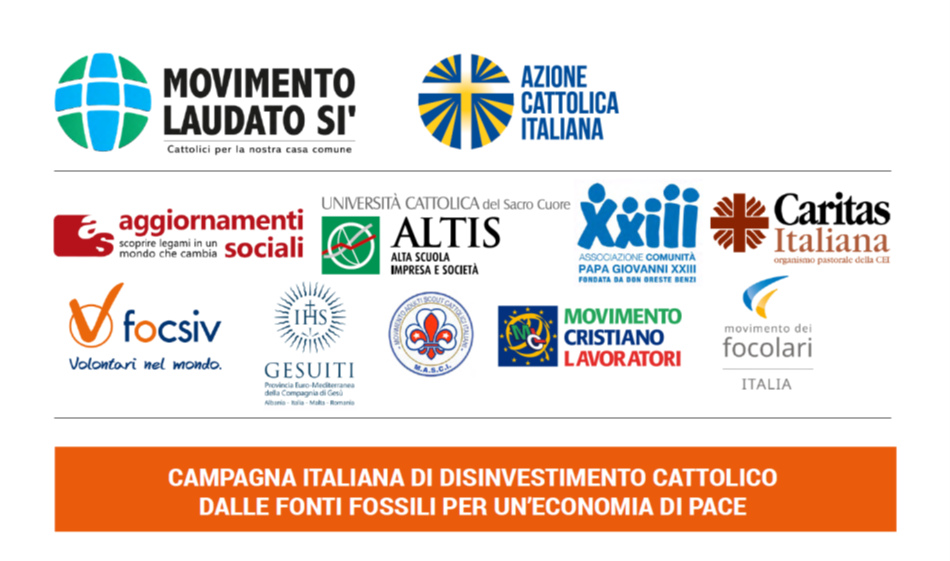 On 21 December, the day when winter begins, the Laudato Si’ Movement and Italian Catholic Action, together with the Italian national Catholic organizations that have already joined the Catholic campaign for divestment from fossil fuels, – Aggiornamenti Sociali, ALTIS – Alta Scuola Impresa e Società dell’Università Cattolica del Sacro Cuore, Ass. Comunità Papa Giovanni XXIII, Caritas Italiana, FOCSIV – Federation of Christian Organisms International Voluntary Service, Euro-Mediterranean Province (Italy, Malta, Albania and Romania) of the Society of Jesus,  MASCI – Italian Catholic Scout Adult Movement, MCL – Christian Workers Movement,  Focolare Movement Italy – launch the “Italian Catholic Divestment Campaign from Fossil Fuels for an Economy of Peace”, with an appeal addressed to all Italian Catholic organizations to sign the commitment to divest from fossil fuels for Christmas, as a testimony of proximity to our brothers and sisters who resist in shelters, under shelling, at the front, without electricity in the cold in Ukraine.

The date of December 21st is meaningful. In fact, it marks the beginning of a winter that promises to be one of the coldest for Europe since the end of the Second World War. And it is precisely on this date that, as stated in the appeal, “We, the Italian national Catholic entities who have already decided not to have funds invested in fossil fuel extraction companies, launch this Appeal so that other Catholic institutions join us by committing to divest over the next five years.

The organizations are invited to put their pledge to divest in the Nativity Scene, contemplating with Jesus all the children who are suffering from the cold and war, as a sign of being stripped “of investments in an extractive and plundering economy, whose geopolitical interests are causing conflicts all over the world and in particular in Ukraine” and of doing their part “to accelerate the ecological transition towards renewable energies, freeing us from the burden of financing, every day we turn on the light, cooking gas, heating, because we depend on Russian gas, a war economy”

The aim of this effort is to accelerate a just ecological transition and the change of course to emerge better from the pandemic and war, relieving our most vulnerable brothers and sisters from the consequences of the climate crisis.