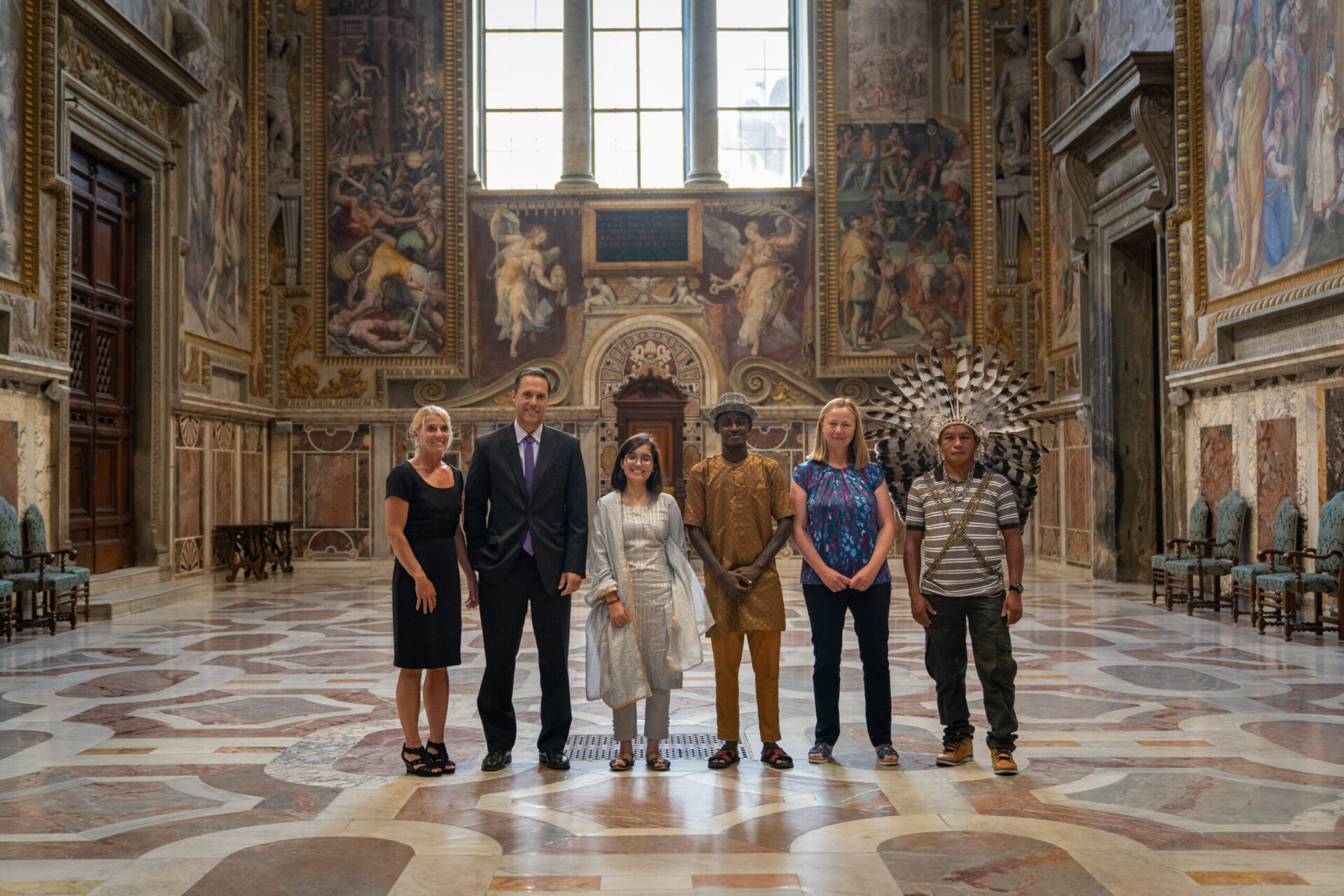 Today, the Feast of St. Francis, a new feature documentary film on humanity’s power to stop the ecological crisis was released at a global premiere in Vatican City.

Entitled The Letter, the film tells the story of diverse frontline leaders’ journeys to Rome to discuss the encyclical letter Laudato Si’ with Pope Francis. Featuring an exclusive dialogue with Pope Francis, the film offers revelatory insights into Pope Francis’ personal story and never-before-seen glimpses of his installation.

The film’s protagonists include an Indigenous leader from the Amazon, a climate refugee and student from Senegal, a youth activist from India, and a husband-and-wife team of scientists from the U.S.. Together, these leaders offer voices that are often unheard in the global conversation on our planet. Through their transformative encounter with the Pope and each other, they find new hope for our common home.

Cardinal Raniero Cantalamessa, the official papal preacher since 1980, appears in the film and provides a unique perspective to understand the ancient Franciscan roots of the Pope’s Laudato Si’ message.

Brief biographies and cleared photos of the protagonists including Pope Francis are here.

The official film trailer is on the YouTube Originals channel and can be embedded in articles.

YouTube Originals is presenting the film. This marks the first time that a film with a Pope will be available free of charge through a streaming service. More context on the film is here.

Today also marks the Holy See’s official entry into the landmark Paris agreement on climate change. Together with the film, these efforts represent Catholics’ increasingly ambitious and active engagement on ecological issues.

This action aligns with alarms from the world’s top climate science body, the U.N.’s Intergovernmental Panel on Climate Change, which issued its most recent report in February of this year saying that “half measures are no longer an option.”

Produced by Oscar-winning team Off the Fence (My Octopus Teacher) in partnership with Laudato Si’ Movement, the film was directed by Emmy-winning director Nicolas Brown. The Letter was made in collaboration with the Dicastery for Communication and the Dicastery for Promoting Integral Human Development. The film is presented by YouTube Originals.

More context on the film is here and at TheLetterFilm.org.

Brief biographies and cleared photos of the protagonists including Pope Francis are here.

A trailer and the full film are both available at the YouTube Originals channel. The film will be live on 4 October at 18.30 CEST.

A press conference will take place at 11.30 CEST on 4 October in Sala Stampa with the following speakers:

Those who are not accredited but who would like to attend in person, please contact Gabriel López Santamaria at [email protected] by 3 October at 12.00 CEST.

For journalists who are not in Rome, the press conference will be live-streamed, available here starting at 11.30 CEST.

Ambassadors to the Holy See, scientists, media executives, Church leaders, and representatives of civil society will attend a screening of the film in the Vatican’s Synod Hall.

Doors open and a photo call will take place at 17.30 CEST. Photos of protagonists and high-level leaders will be available here at 19.00 CEST.

The film begins at 18.30 CEST. A reception follows the film.

Registration is required to attend. Journalists who are interested in attending please register here.

The film’s protagonists, Cardinal Czerny, Secretary Lee, and director Nicolas Brown are available for interviews and photos in person just after the press conference, from approximately 12.30 to 13.30 in Sala Stampa.

Written interviews are available before the press conference. Please send questions to Gabriel López Santamaria at [email protected] by 2 October at 12.00 CEST.

Comments from spokespeople are available.

Statements from leaders, protagonists, and filmmaker

Cardinal Michael Czerny, Prefect of the Dicastery for Promoting Integral Human Development, said “In his encyclical Laudato Si’, Pope Francis wishes to enter into dialogue with all people about planet Earth, our common home. The environmental crisis is not an issue for Catholics alone. It affects everyone, now and future generations. This film is a clarion cry to people everywhere: we have to act together, and we have to do so now.”

Dr. Hoesung Lee, Chair of the Intergovernmental Panel on Climate Change, said “The challenge of climate change is global and the science is clear. The time for action is now.” Dr. Lee continued, “The scientific community welcomes the opportunity to engage with artists and the people of faith. Both faith and art hold a great convening power and can inspire genuine collective climate action.”

Dr. Lorna Gold, president of Laudato Si’ Movement, said “Signs of the ecological catastrophe are all around, and yet we still fail to take notice. This beautiful, thought-provoking film brings home the tragic consequences of inaction, but it also points to the way forward. Through this film, we went way beyond the things that seem to separate us as people from such different backgrounds. We discovered that what unites us is a sense of shared humanity, of being one family. That gives me hope for our common home.”

Dr. Greg Asner, director of Arizona State University’s Center for Global Discovery and Conservation Science and co-author of the Spectranomics technology to create 3D maps of biodiversity, said “Science shows that the planet is changing too rapidly for much of life to keep up. From catastrophic ocean heatwaves to droughts on land, the Earth is telling us over and over that we have pushed our planet too far. We’ve got to turn concern into rapid action. It’s not only the plants and animals that are at risk – we too depend on the planet and its biodiversity to survive and thrive.”

Cacique Odair “Dadá” Borari, Chief-General of the Maró Indigenous Territory, Pará, said “Protecting the Amazon and its people is what I do. I do this every day and I have been doing it for decades. The people who want to destroy the Amazon have attacked me, but I will not quit. I protect the land of my ancestors and the spirit of life within it. But this struggle is not mine alone. Protecting the Amazon is up to all of us.”

Mr. Arouna Kandé, climate refugee and student in sustainable development, said “My family in Senegal didn’t do anything to cause the drought in our village or the floods in the city. As this film makes clear, we live with the choices that other people made. But the future is coming, it is mine and I will lead it well. I am studying in university, planting trees, and trying to help my village develop sustainably. Senegal has the creativity and ingenuity to lead the future more fairly. I will be part of that, and I will do better than was done to me.”

Ms Ridhima Pandey, young climate activist, said “For my generation, seeing the landscape change beyond belief has become almost commonplace. As a child I had nightmares about

the extreme flooding in my country. I am worried about these nightmares becoming the lived reality for children in India. And now the heatwaves are coming on top of the flooding. We young people are saying that enough is enough. The adults must do better. And I’m not waiting for you to fix it. Trust me, my efforts have just begun.”

Dr. Robin Martin, professor at Arizona State University and co-author of the Spectranomics technology to create 3D maps of biodiversity, said “When I met Pope Francis while we were making this film, I gave him a cowry shell inside a koa wood box, all of it from my home island of Hawaii. The cowry, leho in Hawaiian, is a symbol of protection and was also used as currency and even a simple snack that could sustain you on a journey along the shoreline. The koa tree is the largest of the native trees in Hawaiʻi and sought after for building canoes for traveling.  Nature isn’t only something to study. All things have a beauty, history and purpose to be treasured and valued in their own right.”

Nicolas Brown, director of The Letter, said, “Tackling the twin issues of climate change and biodiversity loss is the gravest challenge mankind has ever faced. It is easy to lose hope. But today I am filled with new excitement because of the individuals who came together to make “The Letter”. I bet that their stories will inspire you as they have me! And guided by the moral compass provided by Pope Francis, I expect we all might find a renewed sense of purpose and commitment to protecting our common home and having compassion for all living things, including each other.”