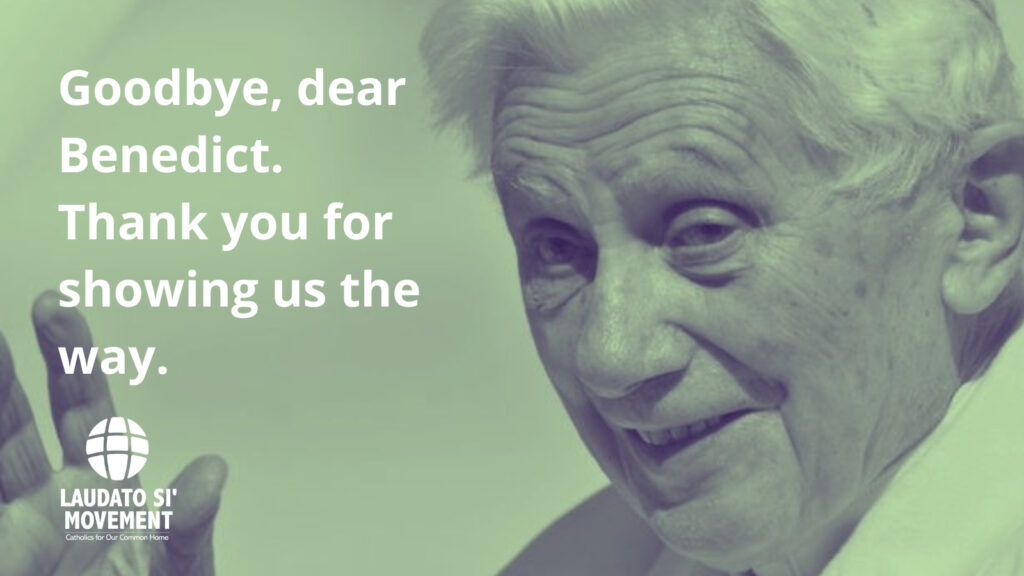 Ending the climate crisis and caring for creation weren’t top priorities for Pope Benedict XVI during his eight-year papacy, at least not in the way they have been for Pope Francis.

But Pope Benedict XVI did his successor and the world a service by frequently speaking out against destruction to the environment and building on the Catholic Church’s history of caring for creation.

“He started the ball rolling in terms of the Vatican getting interested in the environment and global warming, especially,” said Fr. Thomas Reese, a Jesuit priest, and columnist for the Religion News Service. “And people did pay attention.”

The first pope in 600 years to resign will long be known for his elaborate and thoughtful theological statements and writings.

Pope Francis quotes Pope Benedict XVI throughout the document that has helped the world’s 1.2 billion Catholics place millennia of Catholic teaching in the context of today’s ecological crisis.

“It’s enormously important to highlight how much Benedict had paved the way for this and how much Francis explicitly drew from Benedict’s thoughts,” said Vincent Miller, professor and Gudorf Chair in Catholic Theology and Culture at the University of Dayton, a Catholic university in the U.S.

“Pope Francis has been very explicit that he learned a lot from Pope Benedict.”

For millennia, dating back to the Book of Genesis in the Bible, the Catholic Church has made stewardship of creation a priority.

More recently, Saint John Paul II denounced “the lack of respect for life evident in many of the patterns of environmental pollution” and made clear that the “ecological crisis is a moral issue.”

Pope Benedict XVI built on his predecessor’s actions and words, calling Catholics to care for creation and for the world to reform its ways.

“The external deserts in the world are growing because the internal deserts have become so vast. Therefore the earth’s treasures no longer serve to build God’s garden for all to live in, but they have been made to serve the powers of exploitation and destruction,” he said during his inaugural homily in April 2005.

Pope Benedict XVI said in his 2010 World Day of Peace message, “If you want to cultivate peace, protect creation.”

During the 2008 World Day of Peace, he used the phrase “our common home” when describing creation, a term Pope Francis would use seven years later in the subtitle of Laudato Si’.

Just as important and more visibly, Pope Benedict XVI led by example. He oversaw the installation of solar panels on the Vatican’s Nervi Hall, and he approved of the Vatican funding a Hungarian forest, a move aimed at making Vatican City the first country to become carbon neutral.

“He was ahead of his time,” Reese said.

Pope Benedict XVI’s leadership also led dioceses and bishops to make caring for creation a priority in their areas and regions, an effort that has been significantly bolstered under Pope Francis and since the 2015 publication of Laudato Si’.

A note from LSM: Thank you, Pope Benedict, for your leadership in caring for creation. You gave your life to the Church, and your leadership helped Catholics all over the world understand that caring for God’s Earth is part and parcel of who we are as Catholics. May you rest in peace and intercede on our behalf.

“The external deserts in the world are growing because the internal deserts have become so vast. Therefore the earth’s treasures no longer serve to build God’s garden for all to live in, but they have been made to serve the powers of exploitation and destruction,”
May our Lord grant Pooe Benedict, Eternal Rest, Eternal Peace.