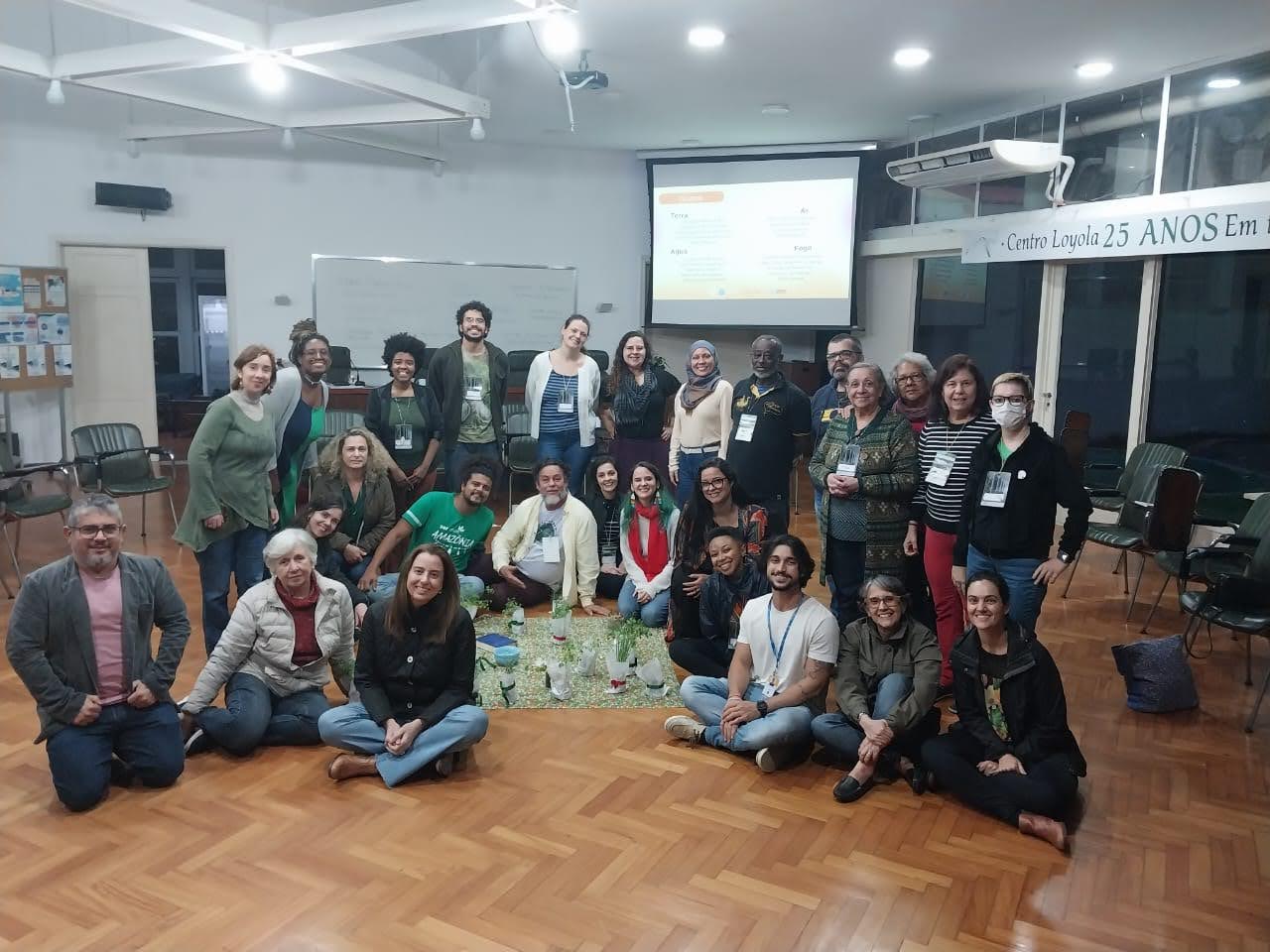 On Saturday, September 17, Feast of Saint Hildegard of Bingen, the Loyola Center for Faith and Culture, connected to Rio’s Pontifical Catholic University (PUC-Rio), welcomed leaders and members of Catholic and Evangelical communities to live and celebrate together a Season of Creation retreat.

In communion with the global ecumenical family who celebrates the #SeasonOfCreation every year to pray and act for our common home, participants were invited to listen to the cry of creation, listen to the song of creation, and listen to the call of creation. The retreat was organized and promoted by the Loyola Center, Laudato Si’ Movement, the “Faith in the Climate” group of the Institute of Religious Studies (ISER), World Community for Christian Meditation (WCCM), Seeds of Democracy, and PUC-Rio’s Anchieta University Pastoral. It also counted on the presence of representatives of the Maria Angu Community Vegetable Garden from Kelson’s favela (slum) in the Maré complex, and the Integral Ecology Pastoral in Rio de Janeiro, connected to the National Conference of Bishops of Brazil. 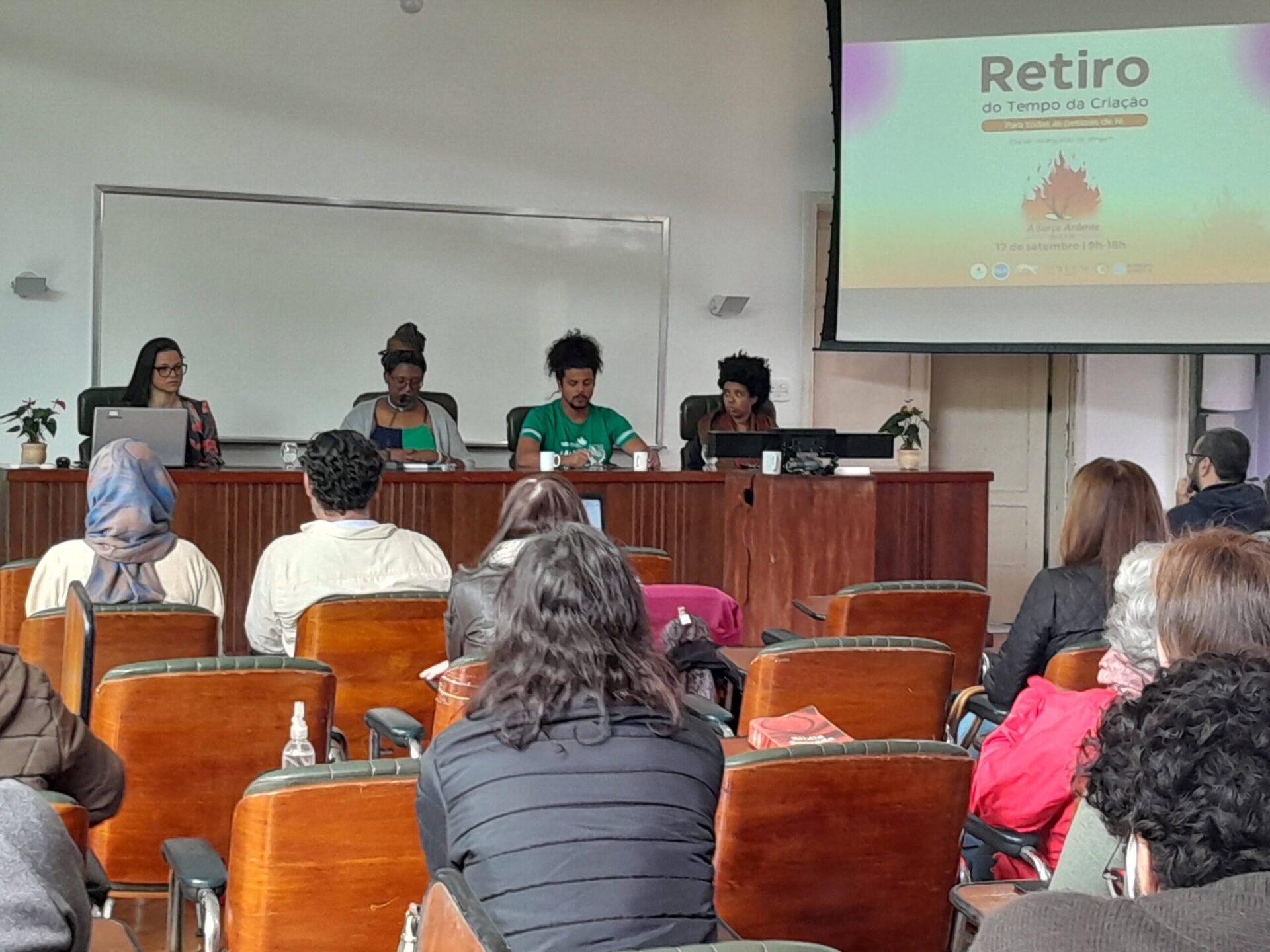 To listen to the cry of creation, the day began with a panel where participants could listen to three leaders on the topic of The Silenced Voices of Creation. Mediated by Sharah Luciano, assistant at “Faith in the Climate”, the panel had the participation of Priscilla dos Reis Ribeiro, Indigenous expert and Protestant theologian who is a member of Seeds of Democracy and brought about the perspective of the voices of Indigenous peoples based on her own experience and cosmology. Walmyr Junior, a historian and creator of the Maria Angu Community Vegetable Garden, brought the voice of the favelas of Rio de Janeiro and the issue of environmental racism. Eliane Santos, a biology student at PUC-Rio, highlighted the importance of climate activism with concrete examples of actions in the city of Rio.

To practice listening to the song of creation, participants were guided by Cristiana Coimbra, a member of WCCM, into a moment of meditation through the practice of repeating a sacred word. The moment was beautifully conducted by her, along with the musical contribution of her husband, Fabio Almeida, with Taizé chants. 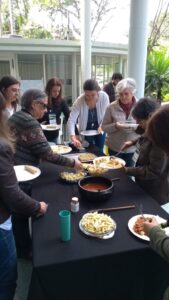 At lunch, everyone was invited to contemplate food inspired by Saint Hildegard of Bingen, the Doctor of the Church who teaches us that in order to have a healthy spiritual and physical life, a balance between body and soul, it is important to have a diet that is rich in whole grains, lots of vegetables and fruit, and little meat. Lunch included vegetarian and vegan choices, including chickpea balls, cassava and sweet potato gnocchi, red sauce with soy protein, and white sauce with zucchini. The entire day was spent without the use of disposables and everyone was invited to wash their own plates and utensils. 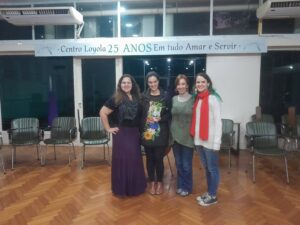 In the afternoon, a moment of circle dances and contemplation in the garden of the Loyola Center were some of the dynamics to awaken the active listening to the song of creation. To listen to the call of creation, there was a moment to share the concrete actions for the creation of the Maria Angu Community Vegetable Garden, in addition to tips for individual actions that each person can do according to the “Faith in the Climate” Guide developed by ISER. Other ideas of individual commitments to care for creation were shared by Suzana Moreira, explaining the different ways to act and engage with Laudato Si’ Movement. Then, each participant was given a gift of a seedling with a satin ribbon where they should write their concrete commitments as a result of this day-retreat. The ribbon was then tied around the seedling and that also brought to mind the Season of Creation symbol, the burning bush.

The day ended with a prayer moment collectively built by each and everyone, inspired by the Indigenous view of sacredness of the four elements and the four cardinal points. The participants were divided into four groups, each representing one of the elements and positioned according to the cardinal points: north–earth, south–water, east–wind, and west–fire. The moment began with listening to ancestral Indigenous words about the sacred meaning of the connection to the four cardinal points, while participants set up a circular altar on the floor with the seedlings and their commitments to the care of the common home. Then, there was a moment of listening to the Word with an excerpt from Ex 3:1-12, followed by each group’s presentation with body expressions of the element they represented. The moment was closed with a mantra and body movements that said “earth is my body, water is my blood, air is my breath, and fire is my spirit”.

It was a very rich day of contemplative, community encounter, full of sharing and deepening of faith in communion with the ecumenical family in this very special Season of prayer and action for our common home.

Watch here the video recording of the morning of the retreat, including the panel on the silenced voices of creation (in Portuguese).