What is an ecological conversion? 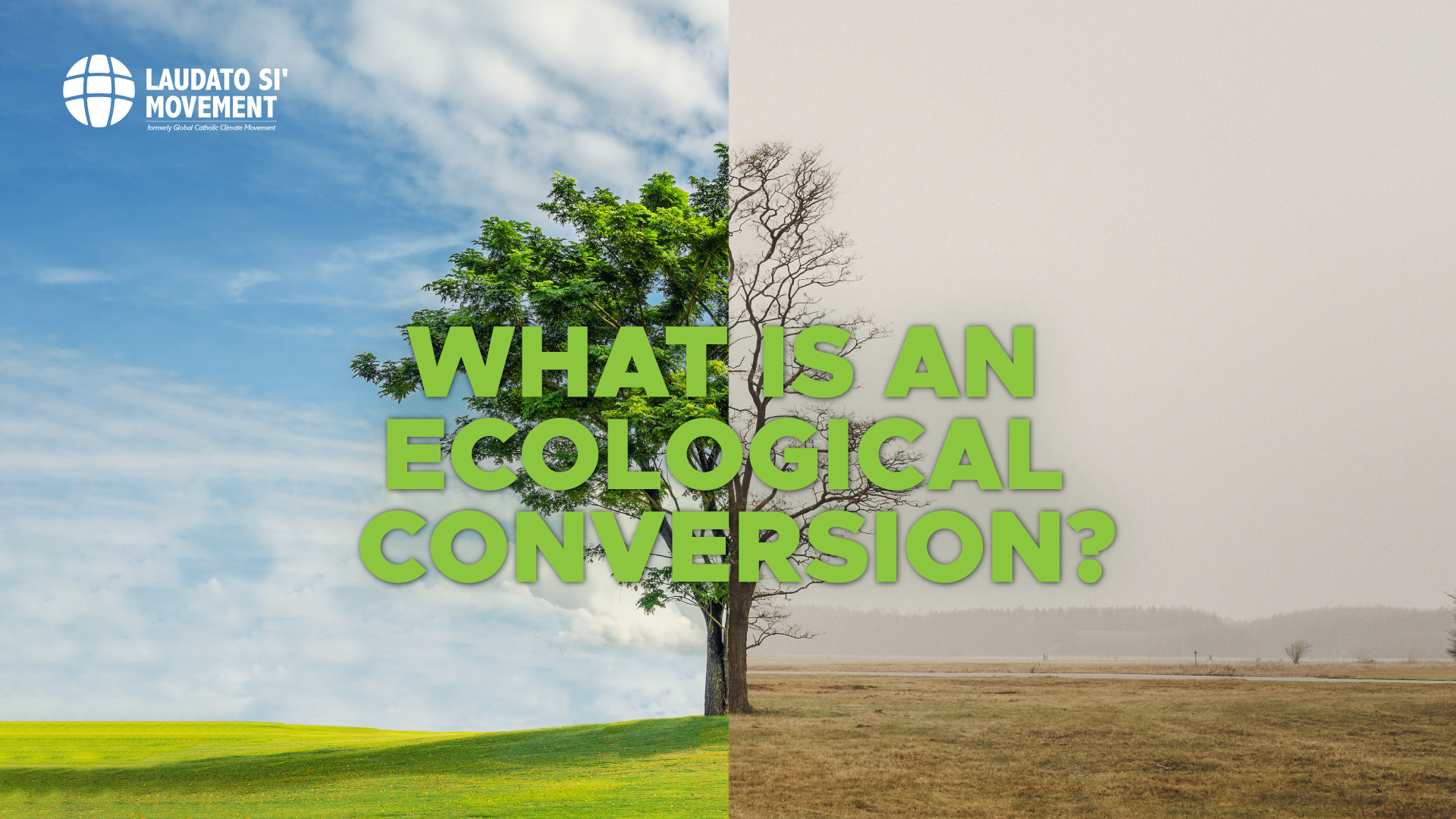 Laudato Si’ Movement defines ecological conversion as the “transformation of hearts and minds toward greater love of God, each other, and creation. It is a process of acknowledging our contribution to the social and ecological crisis and acting in ways that nurture communion: healing and renewing our common home.”

Ecological conversion was first used in the Catholic Church by St. John Paul II during his papacy on 17 January 2001.

St. John Paul II noted that man and woman were made in the “image of God” and were told by God, “Be fruitful and multiply and fill the earth and subdue it, and have dominion over the fish of the sea and over the birds of the heavens and over every living thing that moves on the earth” (Genesis 1:28).

But he pointed out that the relationship is not “absolute, but ministerial.” He highlighted how “humanity has disappointed God’s expectations” by devastating plains and valleys, polluting water and air, and disfiguring the Earth’s habitat.

“We must therefore encourage and support the ‘ecological conversion’ which in recent decades has made humanity more sensitive to the catastrophe to which it has been heading,” St. John Paul II said.

Furthermore, he highlighted the goals of such a conversion, including returning to the right relationships between humans, God and the world, and living by them.

In Laudato Si’, Pope Francis echoes St. John Paul II. His Holiness identifies our current ecological crisis as a “summons to profound interior conversion.” What everyone needs, he writes, is an “‘ecological conversion,’ whereby the effects of their encounter with Jesus Christ become evident in their relationship with the world around them” (LS 217).

But what is an ecological conversion?

In his book The Ten Green Commandments of Laudato Si’, Fr. Joshtrom Kureethadam, Head of the Vatican’s Ecological and Creation Office, writes that an “ecological conversion calls for a return to the Creator,” a turning to God in the humble and genuine spirit of repentance, acknowledging God as the Creator and source of all things, and repairing the broken relationship with God and each other.

Fr. Kureethadam also writes that an “ecological conversion calls for a ‘turning’ to the creation itself” as caring and responsible stewards.

Why undergo an ecological conversion

In Laudato Si’ (220), Pope Francis shares the attitudes and changes within ourselves that can result from undergoing an ecological conversion:

How to undergo an ecological conversion

We recognize that conversion is a grace of the Holy Spirit that is not fully dependent on our own actions.

We know, however, that we can open ourselves to be available to receive the grace through prayer and commitment and enter a way of life that is in more line with Gospel values.

At its most basic level, an ecological conversion involves four steps:

“…we must examine our lives and acknowledge the ways in which we have harmed God’s creation through our actions and our failure to act” (LS 218).

How?
By reading scientific reports, such as a Living Planet Report, IPCC Reports on Climate Change; by going through an ecological examen, checking our own carbon footprint, conducting an energy audit, reviewing our consumption habits, looking for food/water/energy waste.

“Is it not true that an irresponsible use of creation begins precisely where God is marginalized or even denied? If the relationship between human, creatures, and the Creator is forgotten, matter is reduced to a selfish possession, man becomes the ‘last word’, and the purpose of human existence is reduced to a scramble for the maximum number of possessions possible” (Pope Benedict XVI, General Audience 26 August 2009).

“The conversion to the Creator in a humble and genuine spirit of repentance is fundamental, if we are to heal our land and ourselves,” writes Fr. Kureethadam in The Ten Green Commandments of Laudato Si’.

How?
Praying, receiving the sacrament of penance, restitution, reading and meditating on Scripture.

How?
Identify the community you’re connected with, for example, your parish, a Laudato Si’ Circle, or a LSM chapter; identify ways how to transform it in order to live Laudato Si’ and use helpful resources such as this eco-parish guide and the Laudato Si’ Encounter resource.

Ready to get started and/or progress along your ecological conversion? Sign up for the free Laudato Si’ Animator training course that will help you understand the root causes of the climate crisis and give you the tools you need to lead your community in bringing Laudato Si’ to life.

This website uses cookies to improve your experience while you navigate through the website. Out of these, the cookies that are categorized as necessary are stored on your browser as they are essential for the working of basic functionalities of the website. We also use third-party cookies that help us analyze and understand how you use this website. These cookies will be stored in your browser only with your consent. You also have the option to opt-out of these cookies. But opting out of some of these cookies may affect your browsing experience.
Necessary Always Enabled
Necessary cookies are absolutely essential for the website to function properly. These cookies ensure basic functionalities and security features of the website, anonymously.
Functional
Functional cookies help to perform certain functionalities like sharing the content of the website on social media platforms, collect feedbacks, and other third-party features.
Performance
Performance cookies are used to understand and analyze the key performance indexes of the website which helps in delivering a better user experience for the visitors.
Analytics
Analytical cookies are used to understand how visitors interact with the website. These cookies help provide information on metrics the number of visitors, bounce rate, traffic source, etc.
Advertisement
Advertisement cookies are used to provide visitors with relevant ads and marketing campaigns. These cookies track visitors across websites and collect information to provide customized ads.
Others
Other uncategorized cookies are those that are being analyzed and have not been classified into a category as yet.
SAVE & ACCEPT