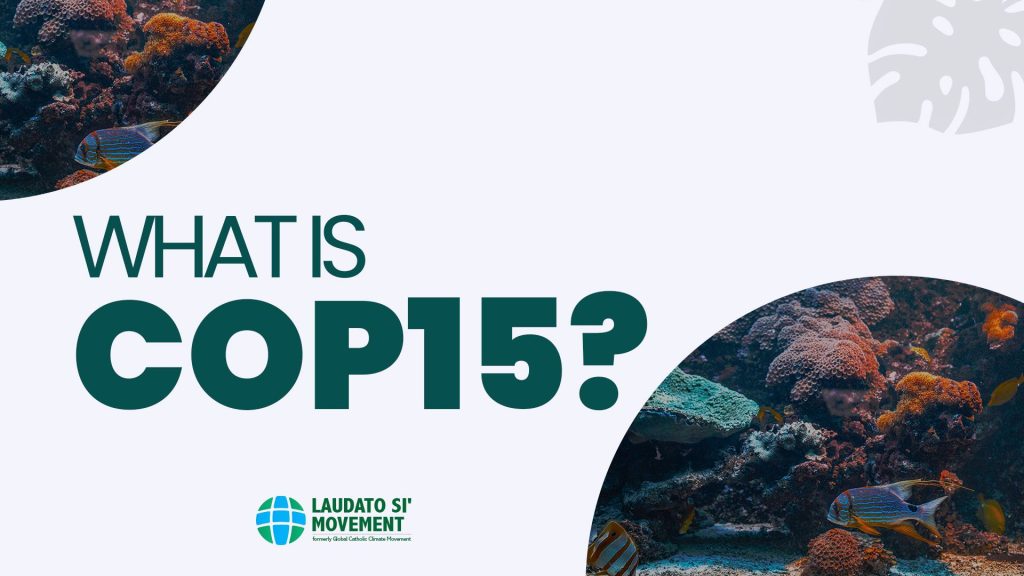 The United Nations conferences on climate change have been instrumental in bringing about global progress against the climate crisis, although much work remains to be done.

In November 2022 the world was focused on the 27th United Nations Conference on Climate Change (COP27) in Egypt, and making sure world leaders establish plans that help them meet the goals of the historic 2015 Paris climate agreement.

However, during this month of December another equally – if not more – important UN conference will occur: online meetings for the 15th UN Convention on Biological Diversity, or COP15.

What is COP15? Why is it so important? And why are Catholic leaders across the globe urging the faithful to advocate for all members of creation and to protect biodiversity ahead of the UN summit?

The UN convention is how countries around the world agree to protect nature and our common home.

The convention was first signed at the Earth Summit in Rio de Janeiro in 1992. It is an international treaty on biodiversity conservation, the sustainable use of biodiversity, and equitably sharing the benefits of natural resources.

The convention to be held in Canada, from December 7 to 19, is especially crucial because little progress has been made in protecting nature during the past 20 years.

Countries around the world agreed to key targets in 2002 and again in 2010, yet little action followed such agreements.

As Reuters recently reported: “The summit hopes to set both long-term goals for mid-century and shorter-term targets for 2030 and, crucially, push for those to be enshrined in national policies.”

During the past 20 years, “Nobody actually owned those targets. No wonder in 10 years’ time we discover none of those targets are fully fulfilled,” said Li Shuo, a senior climate and energy policy officer for Greenpeace China.

A look at the official draft of the 2030 targets shows the needed, ambitious action that all members of God’s creation have been yearning for in recent decades. Such actions will require all of the world working together, and all people of faith making sure that their elected officials and others are doing everything they can to meet the goals.

Why does protecting nature and biodiversity matter?

On a practical level, we can’t stop the climate crisis without healthy ecosystems and thriving nature. As the “Healthy Planet, Healthy People” petition, which Laudato Si’ Movement disseminated in 2021, made clear, “the climate crisis and biodiversity collapse are twin crises.”

“A warming world is exacerbating the spiraling loss of blameless species. And further loss of nature will jeopardize our capacity to deliver on the 1.5 degree limit to global warming. We are hurtling towards a global catastrophe, one that looks to be irreversible for our common home, with tragic loss of life across all creation – unless we act now with great urgency”, mentioned in the petition.

​Put plainly, humankind needs nature to survive and prosper. We can’t have healthy people without a healthy planet, and that’s especially the case as we work to tackle the climate crisis.

Pope Francis highlights in Laudato Si’, “Each year sees the disappearance of thousands of plant and animal species which we will never know, which our children will never see, because they have been lost forever. The great majority become extinct for reasons related to human activity. Because of us, thousands of species will no longer give glory to God by their very existence, nor convey their message to us. We have no such right” (LS 33).

Protecting creation is essential to our faith. The Laudato Si’ Research Institute report states, “participating actively or inactively in the destruction of biodiversity, then, is an ecological sin.”

Why is it reported that the Vatican has not signed the UN Convention on Biodiversity?

Yes, please help us understand the Vatican’s position Re: Cop15. Not signing undermines the moral authority of Laudato Si.

Excellent question Martin. I’m a bit mystified. I came across several recent media reports (e.g. The Guardian, Mother Jones) claiming that the Vatican has not signed the final agreement at COP15 Montreal. I just sent a detailed email to Laudato Si’ Movement -0 attaching the article – and asking them if they know the factual position. Unfortunately, there’s no email address given on the LSM website, so I tried the online contact form