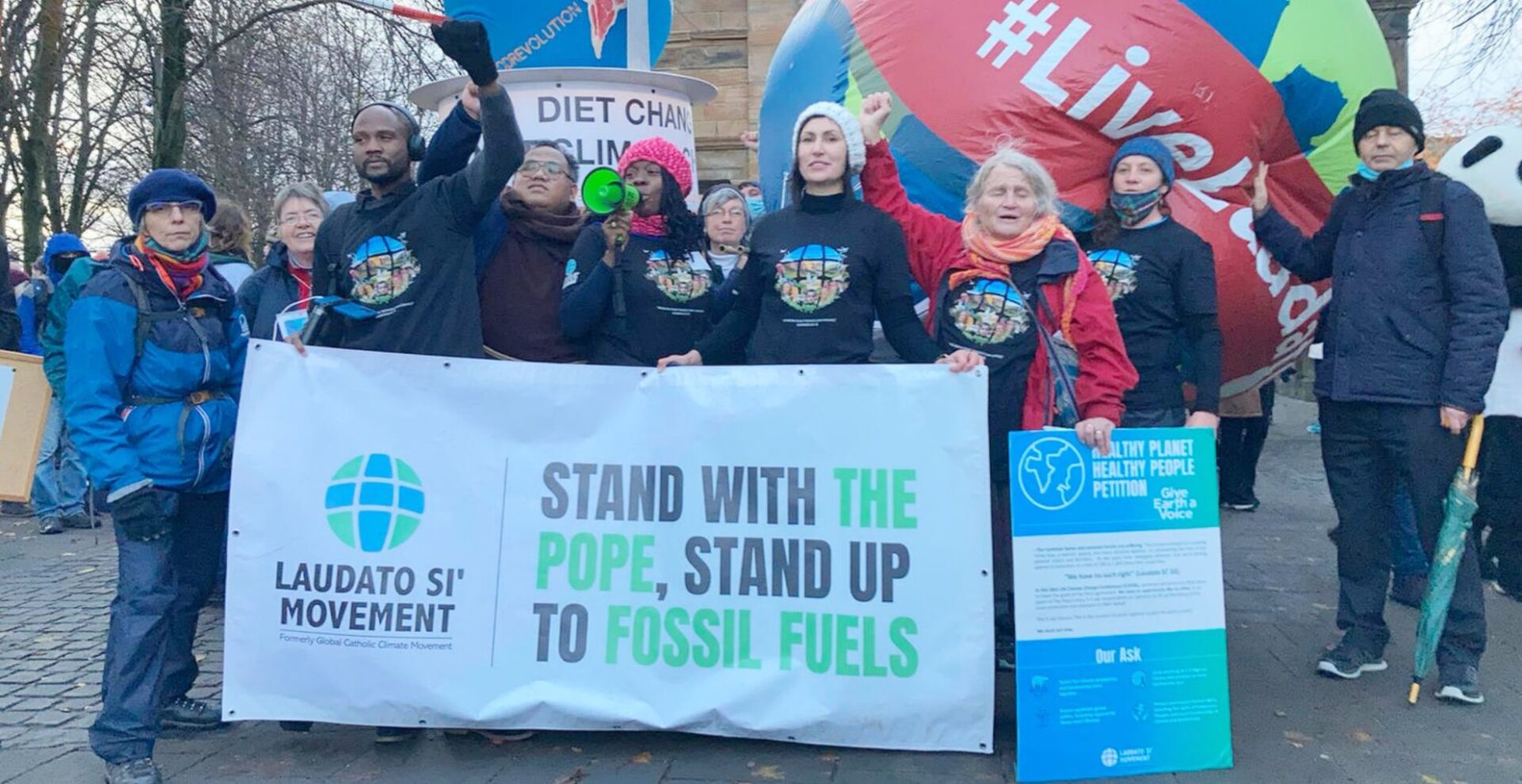 Catholics from all over the world were disappointed with the agreement reached, which they considered insufficient. But at the same time they are hopeful about a society committed to the battle against the climate crisis.

17 November 2021 – The United Nations 26th Climate Change Conference ended a few days ago after almost two weeks of negotiations by leaders and demands from society. The final COP26 Agreement caused disappointment among Catholics from all over the world, who were present in Glasgow to raise their voices on behalf of our common home, and participated in marches, meetings and innovative initiatives.

Upon learning of the final agreement, Tomás Insua, executive director of the Laudato Si’ Movement, expressed that “world leaders have once again fallen far short of what Pope Francis and many others hoped would come out of the UN summit in Glasgow. The final agreement does not come close to addressing the climate crisis we are experiencing. It is outrageous.”

But Insua added that, as seen in Glasgow and around the world through marches, activities and meetings, “the global movement to care for our common home is stronger than ever and will not stop. With partners around the world, this movement will continue the urgent work of saving God’s Creation.”

Already, last Wednesday, the Holy See had expressed through a statement that it remained hopeful of an agreement with “a clear roadmap” to fill the gaps that have emerged in the areas of mitigation, adaptation and finance, fundamental aspects that will need to be strengthened and renewed in order to achieve the goals of the Paris Agreement.

For their part, more than 60 Catholic organizations, including the Laudato Si’ Movement, issued a joint statement last Friday in which they expressed that “an economy based on extractive and unsustainable fossil fuels is causing the climate crisis that is destroying God’s creation and harming the most vulnerable,” and called for essential steps to accelerate investment in a clean energy future for all.

With petitions, divestment announcements, a film and demonstrations, Catholics were present at COP26.

Thousands of Catholics from around the world gathered in Glasgow during COP26 to ensure leaders heard the cry of the Earth and the cry of the poor, those most affected by the climate crisis.

Over the course of almost two weeks, Catholics participated in numerous events and initiatives to make their demands known, such as the presentation of the Healthy Planet, Healthy People petition. The prophetic petition supports Pope Francis’ call for urgent action to care for our common home and has the signatures of more than 130,000 Catholics and 425 partner organizations, which collectively represent hundreds of thousands more Catholics.

Religious communities comprise 80 percent of the world’s population, which is why Catholic and other faith-based institutions, understanding their important role in preserving the planet, announced days before the UN summit the largest-ever joint divestment announcement.

In total, 72 faith-based institutions, including 55 Catholic institutions, with more than $4.2 billion of combined assets under management announced their commitment to divest from fossil fuels. These prophetic institutions joined the 1,485 organizations with combined assets totaling $39 billion that have already made some kind of divestment, as stated in the “Divest Invest 2021” report.

In addition, last Tuesday The New York Times held a green carpet premiere screening of excerpts of “Laudato Si’,” which is produced by Off The Fence. The full-length film, which will debut on YouTube Originals next year, documents Pope Francis’ encyclical and tells the stories of those facing the effects of the planetary crisis as they build bonds to face the future with hope.

Lorna Gold, Chair of the Board of Directors of the Laudato Si’ Movement, argued during a subsequent meeting entitled “Catholics in Glasgow” that another COP was happening in the streets. While world leaders debated action inside, outside some 100,000 people like 67-year-old grandmother Isabella Harding and Laudato Si’ Animators and religious sisters Kate Midgley and Zoe Leadbetter, participated in an unprecedented march on the Global Day of Action for Climate Justice, despite rain and wind.

Catholics will continue to speak out when it comes to caring for the environment, which is why they recently launched the Laudato Si’ Action Platform as a space for everyone to share their actions on behalf of the planet and achieve total sustainability in the spirit of Laudato Si’.