Three questions that explain why Benedict XVI is the “green pope” 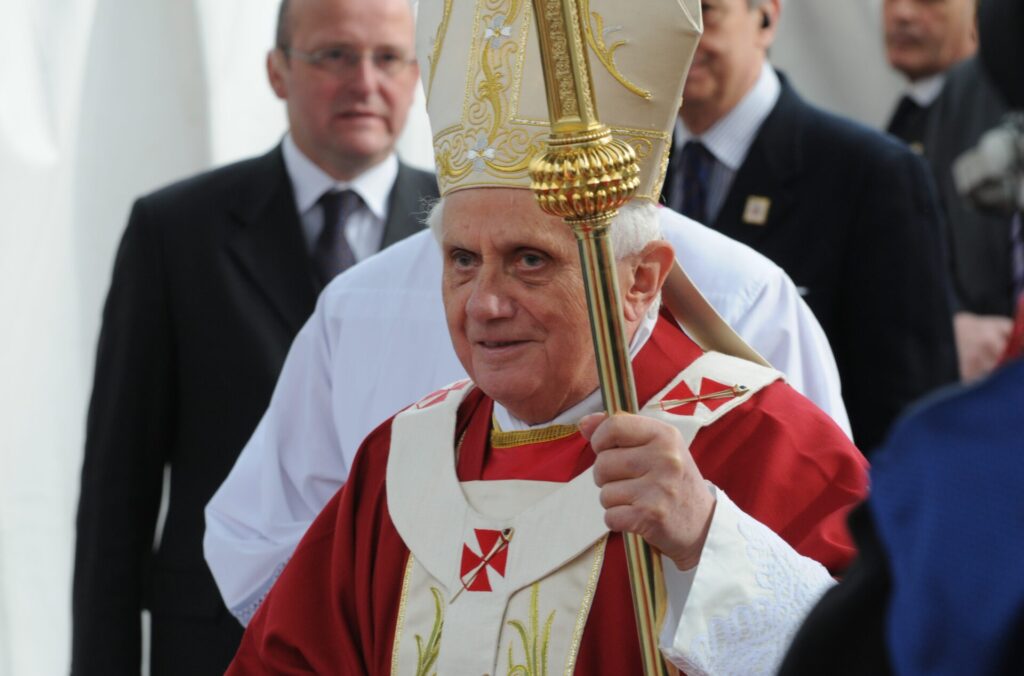 Pope Benedict XVI was referred to as the “green pope.” What do you see as his major contributions to Catholic teaching on the environment that warrant that title?

Pope Benedict recognized that care for the environment is a religious obligation of reverence that is due to God’s Creation, that care for Creation is a moral act, that environmental sustainability is essential for civic peace and economic well-being, and that because excessive wealth and consumption contributes to poverty, sustainable development is a modern responsibility.

What connections do you see between Pope Benedict and Pope Francis in how each have approached teaching on the importance of caring for creation? How did their approaches differ?

How do you see Pope Benedict’s teachings on creation alive today? How might Catholics respond and live them out now and in the future?

The Teachings of a Green Pope

Pope Benedict XVI was known as the Green Pope as early as 2008 (Newsweek).  He listed “destruction of the environment, excessive wealth, and the creation of poverty” as sins.

First is the Message for the World Day of Peace in 2010, with the theme and title If You Want to Cultivate Peace, Protect Creation, which detailed why the misuse of creation has been a principal cause in world conflicts.

“Respect for creation is of immense consequence, not least because ‘creation is the beginning and the foundation of all God’s works,’ and its preservation has now become essential for the pacific coexistence of mankind. Man’s inhumanity to man has given rise to numerous threats to peace and to authentic and integral human development – wars, international and regional conflicts, acts of terrorism, and violations of human rights. Yet no less troubling are the threats arising from the neglect – if not downright misuse – of the earth and the natural goods that God has given us. For this reason, it is imperative that mankind renew and strengthen ‘that covenant between human beings and the environment, which should mirror the creative love of God, from whom we come and towards whom we are journeying’” (Message 2010, 1).

Second is the encyclical Caritas in veritate, which has extended sections on technology and human creativity (68-71) and on energy (49-52) and water as resources that must be shared justly and with attention to the dignity of human life at every level.

Next, Pope Benedict followed his words with actions.  According to National Geographic, “He approved a plan to cover the Vatican’s Paul VI hall with solar panels, enough to power the lighting, heating, and cooling of a portion of the entire country (which covers, of course, a mere one-fifth of a square mile). He authorized the Vatican’s bank to purchase carbon credits by funding a Hungarian forest that would make the Catholic city-state the only country fully carbon neutral. And several years later, he unveiled a new hybrid Popemobile that would be partially electric.”

Furthermore, during his tenure, the Pontifical Academy of Sciences released a report on climate change recommending that world leaders cut carbon dioxide emissions, reduce existing pollution, and prepare for the inevitable impacts of a changing climate.

Benedict XVI’s teachings contributed to several books that share his views on the real meaning of progress and development, and what that means for our planet of limited resources. These books included Ten Commandments for the Environment published in 2009 and The Environment “which shares his thoughts on everyone’s right to food, right to water and responsible sharing” in 2012.

Caritas in veritate: 69. The challenge of development today is closely linked to technological progress, with its astounding applications in the field of biology. Technology — it is worth emphasizing — is a profoundly human reality, linked to the autonomy and freedom of man. In technology we express and confirm the hegemony of the spirit over matter. “The human spirit, ‘increasingly free of its bondage to creatures, can be more easily drawn to the worship and contemplation of the Creator’”[1]. Technology enables us to exercise dominion over matter, to reduce risks, to save labour, to improve our conditions of life. It touches the heart of the vocation of human labour: in technology, seen as the product of his genius, man recognizes himself and forges his own humanity.